The tent cot was actually not too bad to sleep on for this first night here, most likely due to the fact that the jet lag had set in and I could most likely sleep anywhere at this point.  There was an opportunity to run with some of the Kenyan’s who were training for future Olympics, though I ended up sleeping through their departure.  I think I would have been able to keep up with them for about 100 yards and then it would have all went downhill from there!

Instead I had a nice relaxing morning talking with those that remained behind as we waited for breakfast.  Our goals today consisted of more work at the school as well as going through all of the donated materials to bring to the school and teachers.

At the building site I was able to get back in the swing of painting as we were put into one of the new rooms being finished.  The local workers hooked us up with 6 inch brushes, where I would have loved to have had my 18 inch roller, tray and extendable pole and diluted the paint with some water to make it stretch a little further.

We were basically doing a primer coat and I ended up on one of the ladders (if you could call it that as it was more like a couple boards nailed together with no right angles in site!) painting the top portion with Mike, while many others helped to paint the lower levels.  When the ladder was in the way, though it left a small square that could not be painted, so I mastered my jump painting technique to get a layer where it needed to be.  Thanks to watching the Masai videos from the previous World Teacher Aid trip, I got the idea to take this method on.

Once we were done painting, while others were doing similar odds and ends jobs we all headed back for lunch and to go through the massive collection of goods we had brought over.  I myself had at least three bags of good, such as lacrosse sticks, clothes, sporting equipment and more that we were all organizing to determine where it would go.

I had envisioned being able to distribute each and everything, but the reality of the matter is that would take forever and would also present some chaos in the process with the mob of students wanting things.  World Teacher Aid had it all set in how we would approach the situation.

Large piles started to build that consisted of sporting equipment, schools supplies, clothes and miscellaneous items which we then packed up again to bring to the school

As we were fortunate enough to have the students in school sessions, we were able to see the schools rooms that had been built with the help of World Teacher Aid and all of their donors.  The kids were definitely full of energy and suspense in regards to what type of goodies they might pick out.  David Frey was getting them all ramped up in each class having them hoot and holler and later when they were all lined up outside the rooms in their respective classes by throwing a football around with them.

Before they all headed out of their rooms though, each student received a tote bag which contained a composition notebook, pencils, markers and more that were donated by Armand and Marianna Morin.  The looks on some of the faces was absolutely breathtaking. Smiles, joy, jumping up and down with excitement was truly amazing to see on these kids.

Once we got things squared away in each room, we had them all line up at the doorway and three at a time, they were able to come in and pick out something that they liked as well as some candy and a sticker.  My mother, who works with Disney Vacation club, helped with literally thousands of stickers that were soon being seen on shirts and foreheads all over the school.  We only gave out a couple rolls of stickers while we were there so they will have plenty to hand out over the next years.

As the kids picked what they wanted, another group of three would come in and see what remained.  The joy and excitement on their faces was amazing and very contagious.  When we see what little they are joyous, for while many back in the US take most things for granted, it makes you really change your whole mind frame in regards to why you might do what you do on a day to day basis.  As a teacher back home, most kids would frown or complain when you gave them a bag full of school supplies. 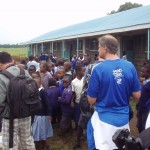 David Frey starting to rile the kids up in Kenya 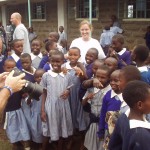 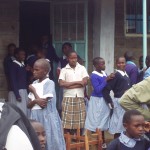 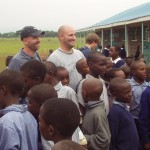 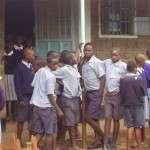 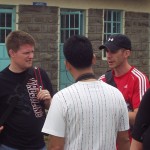 Stu, Russell and Mike talk over the donation strategy in kenya 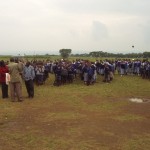 Kenyan classes lining up before the donation from world teacher aid 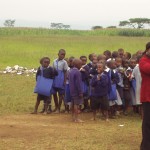 Kenyan students with their school supplies from World Teacher Aid 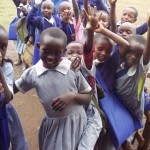 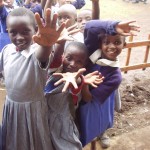 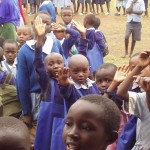 Excited to enter the rooms in kenya with World teacher aid 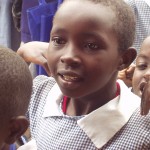 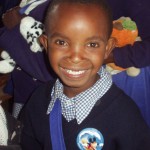 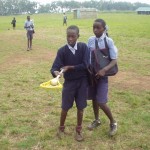 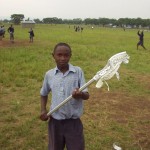 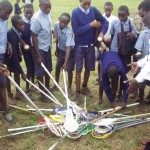 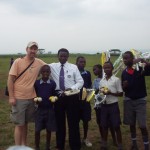 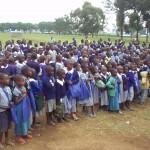 I had a large section of a sticker roll left over and started giving them out to a few kids who did not seem to have them yet, when I became mobbed with kids grabbing and pushing to get their so they could put one on themselves.  Some of them were grabbing for more when already given one and some of the respected elders (carrying the sticks) helped out and even they got some stickers to take back to their families as well!  It was an interesting scene to say the least.

As one of my main goals was to try to bring over, introduce and leave some lacrosse sticks at the school, I was able to have them grab the two bags of sticks and it soon become utter chaos…Sticks were going all over the places and balls were flying in every direction.  I was able to stick with a couple of kids who seemed to be able to grasp the concept rather quickly and were able to throw and catch the ball a couple times.

As we were limited for time, I was only able to spend a few minutes showing them how to do a groundball or throw properly and some were trying to do it underhand.  They seemed excited and when I was able to get some group shots and make a short video thanking those that donated, I was caught off guard and pleased at the same time, when the headmaster also made a statement of thanks in regards to introducing a new sport to their physical education program that will change it for the future.  I could not have asked for a better ending to the video as it was unrequested.

Just as in my experience overseas before as a Peace Corps Volunteer in the Solomon Islands, I can only hope that while I am not there, the materials continue to be used and taken care of to the best of their ability…I guess it is incentive to get back there again to see how things are progressing in future years.

After all the excitement of the donations and seeing the extreme joy on the faces of the kids, it was time to head back for dinner and more networking.  It was funny as I had previously asked one of the younger people in the group what he wanted to do in college and he mentioned computer science.  I responded that this was a perfect place to be with the connections he could make here in regards to marketing and working online and he came back with something like, “I know, but they talk about it all the time!” which I found somewhat humorous.

I was more than ready with ears wide open to listen and grab any ideas I would to improve my online marketing business and could not dream of ever being in such a great group of people who are succeeded online and sharing their progress with the world in many ways, whether it be through knowledge or helping to build schools and feed students.  The fact that they make more money than most people is one thing, but the fact that they also give back to the communities around the world puts them above everyone else in the online community.

I challenge those of you with lots of success to experience this as well and build your own room in Kenya as part of World Teacher Aid!

After dinner we all hung out around the fire and one by one talked about a defining moment in the trip thus far.  One of mine of course was the basic fact that I was there (even after the plane delays) with much thanks going out to Russell Brunson and Dot Com Secrets X as I had won his contest and came as his guess…which you can do as well as he in bringing more students in upcoming years…All you have to do is join DCSX HERE and take action when he tells you to!

I have always found that when I take action, I get results…simple process.

After we all decided it was late enough, Mike and I talked some more business ideas/background in the tent before heading to sleep ourselves a little later this night.